The Isle of Arran

What a great excuse to visit one of your very favourite places on earth to do a bit of research. The Isle of Arran is a place where you can find a little bit of everything you'd ever want from a Scottish island; an ever-changing coastline, dramatic mountain peaks, sheltered beaches, verdant forests, great cultural festivals and a wealth of tasty local produce. Arran is only 20 miles long and has a population of just 5000, but the range of food and drink is impressive: from traditional Scottish oatcakes, a whole host of cheeses, real dairy ice creams & sorbets, fruit preserves and mustards to real ales and malt whisky from the 2007 distillery of the year.

The Isle of Arran, is one of the most southerly Scottish islands and sits in the Firth of Clyde between Ayrshire and Kintyre. It is 20 miles long by 10 miles wide but has a remarkable diversity of landscapes and seascapes. In The Courtyard Shop in Kenmore we already stock lots of great food from Arran including our best selling ice cream, but this would clearly be difficult to include in a hamper. My mission was to find out if there were other lines we could add to our assortment in order to create a hamper that offered all the very best that Arran has to offer.

We stayed at the wonderful Auchrannie Resort and Spa which is tucked away in its own beautiful grounds behind Brodick the biggest of the numerous small pretty towns on the island. 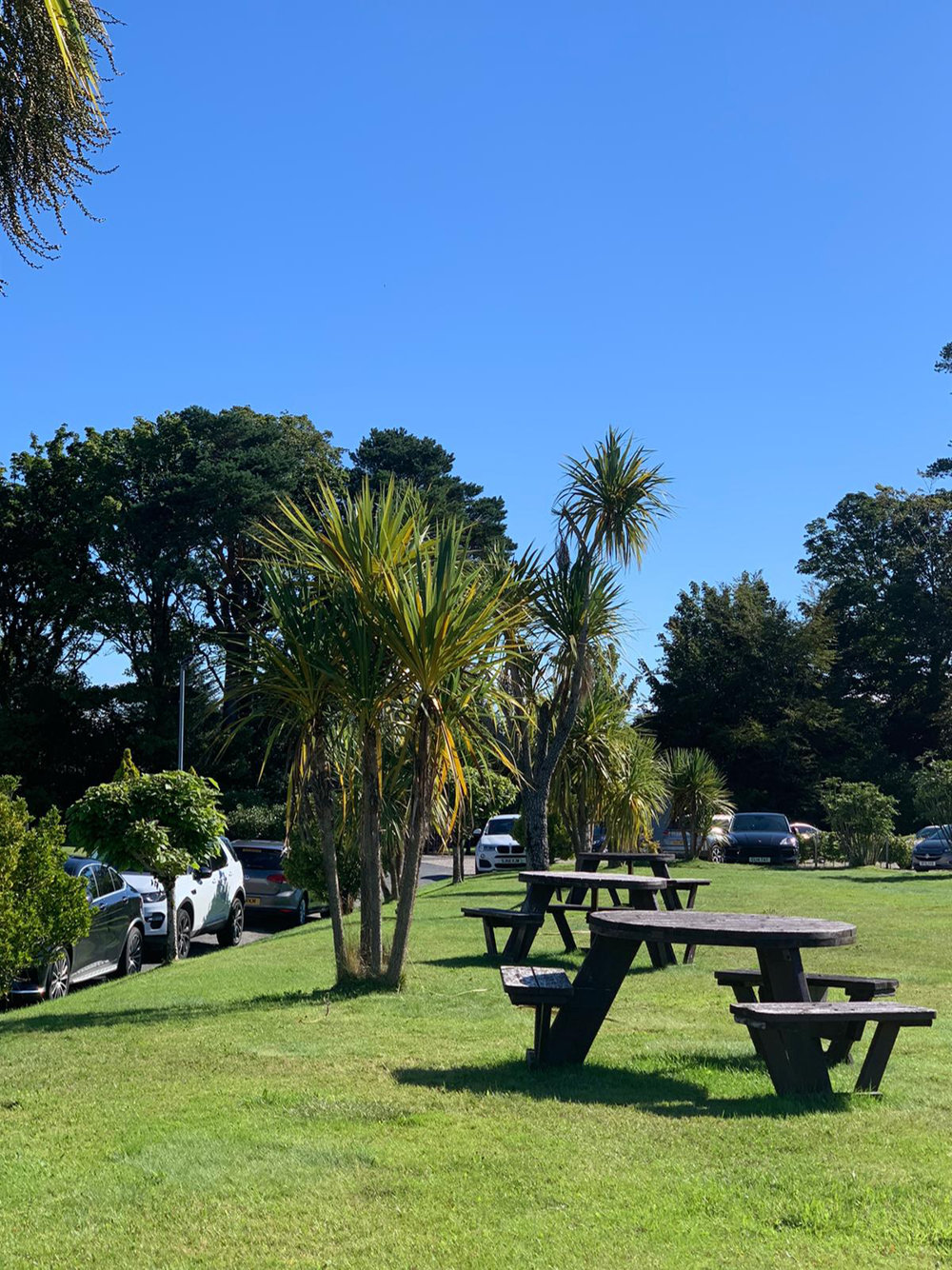 Everyone was sorted out for Covid compliance and the atmosphere was relaxed and welcoming. We already knew a lot of the best known Arran brands were based in and around Brodick so we didn't have far to travel in order to begin our search.

"Taste of Arran" is a business group set up to promote all that is good about food and drink grown or produced on the island and one of the key drivers behind this business and so many other food related ideas coming from Arran is locally born and bred Alastair Dobson the MD of the Taste of Arran group. To say this man is proud of where he comes from would be an understatement. We met outside his very successful Ice Cream and Pizza shop called The Parlour at the west end of Brodick's main street. We decided to stay outdoors as it was easier to talk without wearing face masks. This proved to be an interesting choice. The man is a people magnet. Every commercial van which passed tooted its horn or a pleasantry was shouted out the window in Alastair's direction. Every second person that passed on the street, be they local or just over on the ferry for the day seemed to know him and wanted to say hello. He is a mine of information and having spent a very valuable hour with him he sent us off with a list of suppliers and some great commercial advice.

We wandered into Wooley's Bakery only 3 doors along from Alastair's shop. Wooley's of Arran has been firing yeast dough in two antique scotch ovens since the middle of the nineteenth century. Today’s owners have run the bakery since the 1980s when the craft bakery was almost at a standstill due to mass-produced bread products filling the shelves. These days though this trend has been reversed and Wooley’s has become famous far and wide for its range of traditionally baked Scottish Oatcakes; still handmade to a closely guarded family recipe. We have sold these very successfully The Courtyard and since putting them online they have proved very popular. 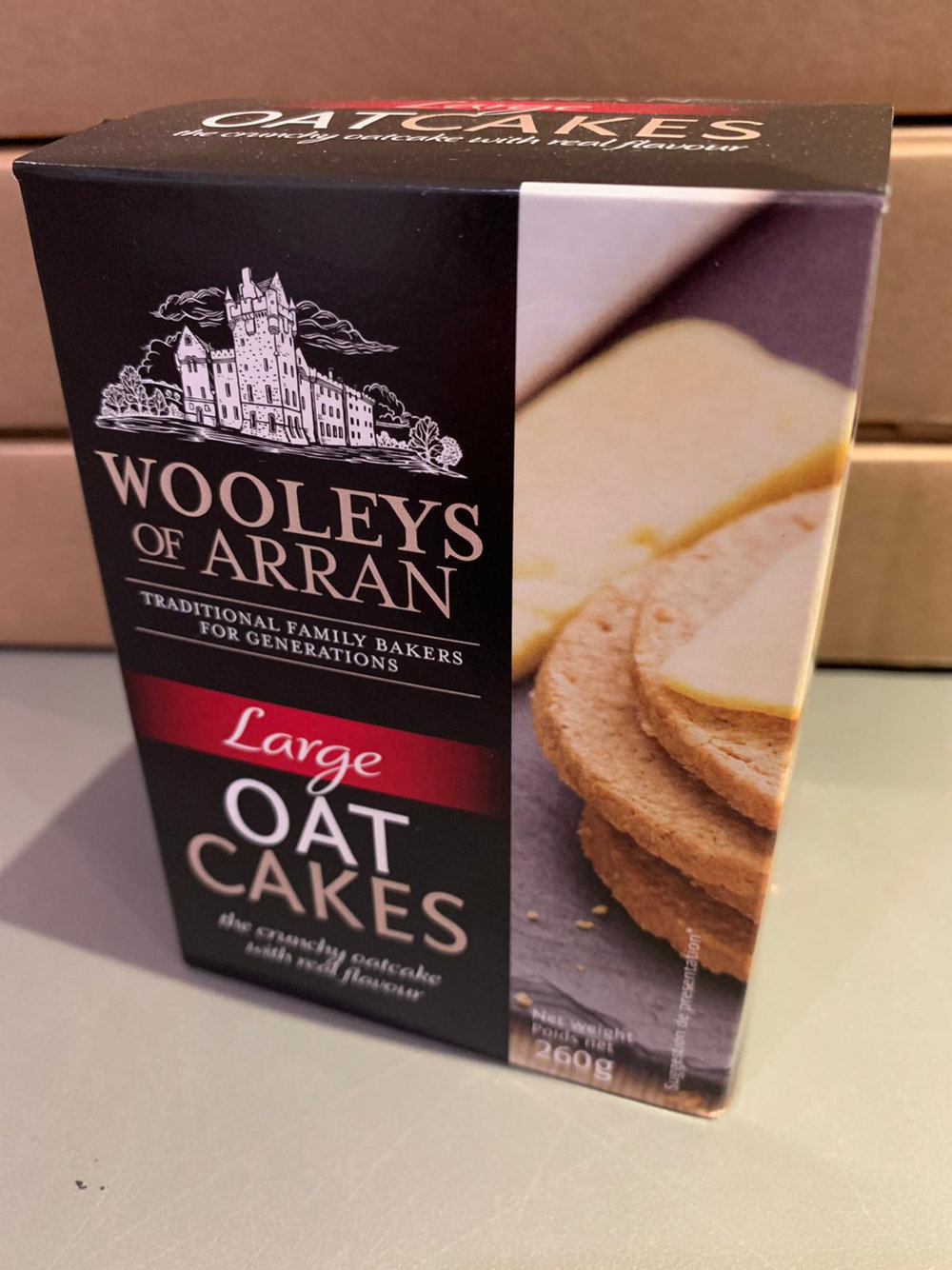 We decided to eat early and had booked a table at The Wineport bar bistro in Cladach on the outskirts of Brodick, at the bottom of Arran's highest peak Goat Fell. En route we had to pass The Island Cheese Company who have been producing their range of mouthwatering cheeses in a small creamery set within the former Home Farm of Brodick Castle for more than thirteen years. Another must have on Alastair's recommendation so a visit was in order. The Cheese shop was really well set out to cope with the covid conditions and we easily picked out some favourites to take with us to have in tomorrow's picnic. I had never tasted the Arran Blue before, but, on a single tasting this was quickly earmarked for the Arran Hamper. 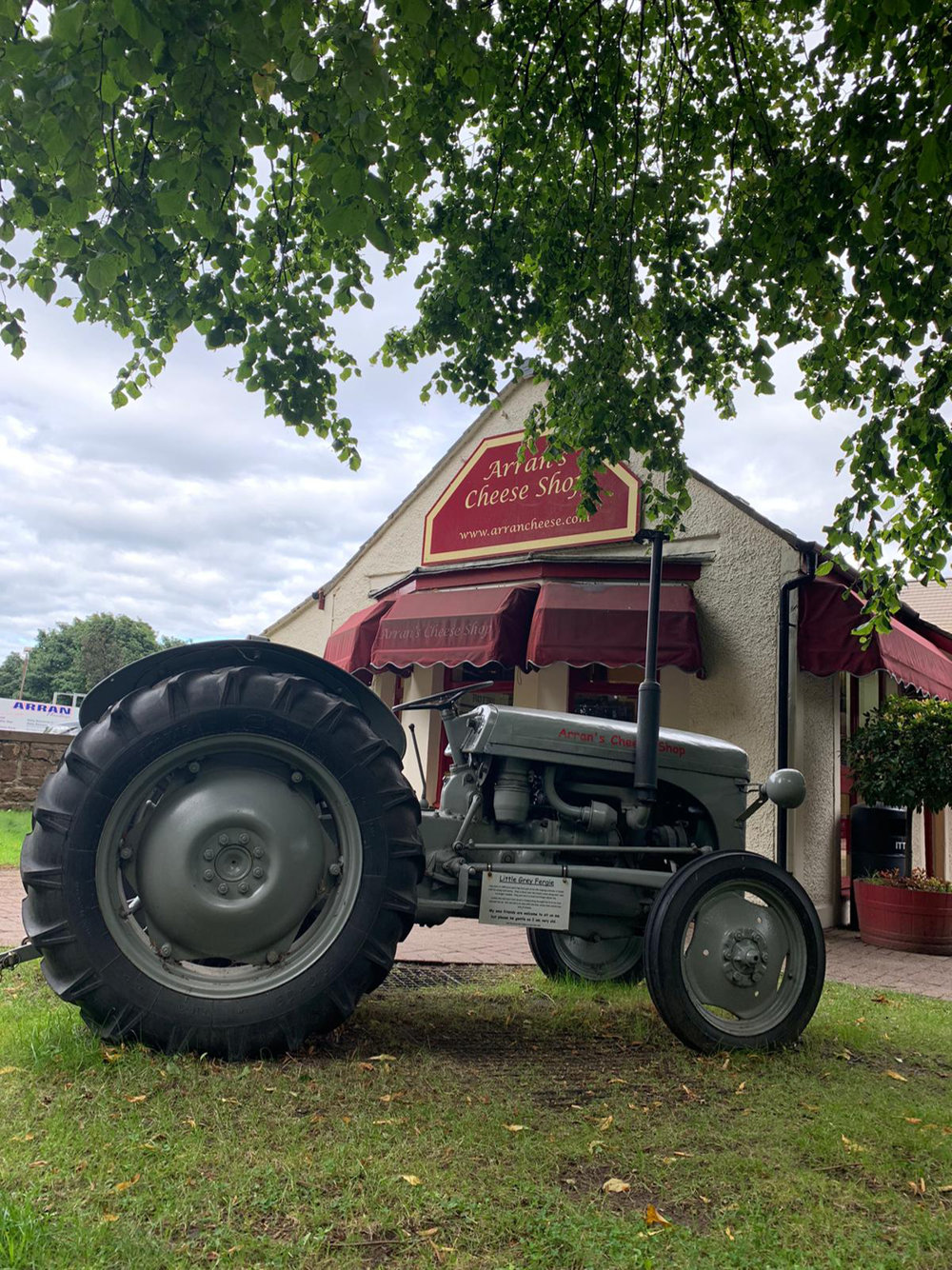 After a very comfortable night's sleep we headed off next morning to Lochranza, the most north westerly village on the island. It is reputed to have the least hours of sunshine of any village in the United Kingdom, and is the most shaded village in the entire world according to world climate experts. I know I'm not selling it with this description but it always seems to be sunny when we are there. It has a population of about 200 and that doesn't include the herd of Red Deer who have also taken up residence in the village. 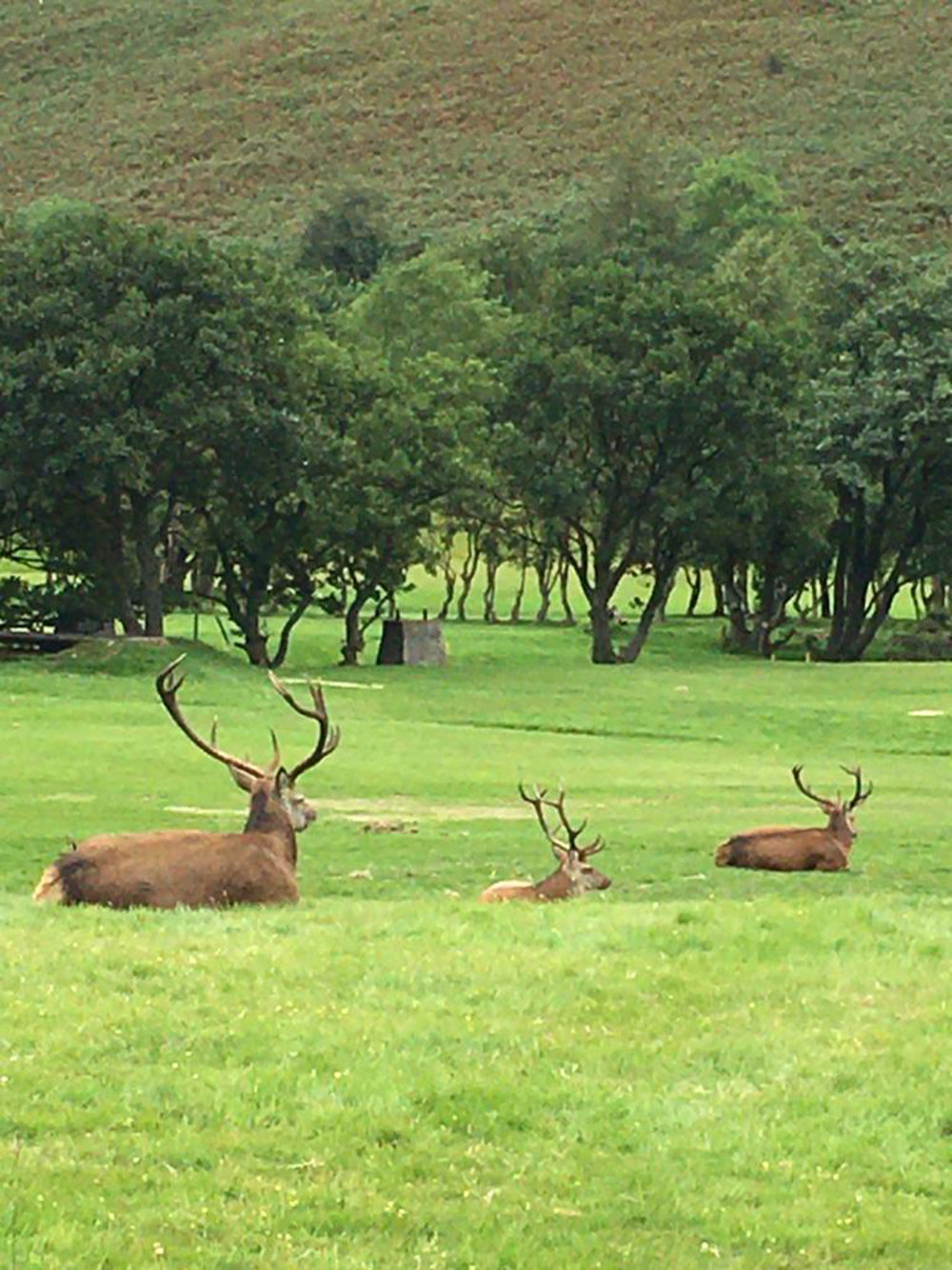 Lochranza is the site of the Arran Distillery, built in 1995 and producing the Arran Single Malt. The distillery is one of the major industries of the island. The bar of the Lochranza Hotel, to the north of the distillery, has one of the largest collections of Scotch whisky available by the measure in the country: over 350 different Scotch whiskies are available. The distillery was very welcoming and modern compared to many others I have visited and it only further confirmed that this would be the whisky option for our Arran Hamper. We went to the ruined castle dating back to the 16th century on the shores of Loch Ranza and sat looking out at the boats moored in the bay. Feeling the draft on the backs of our neck from the ever present katabatic wind from heights of Tor Meadhonach blowing out to sea,we enjoyed our picnic which was made even better when we added the Arran chutney to the blue cheese and oatcakes we had packed. 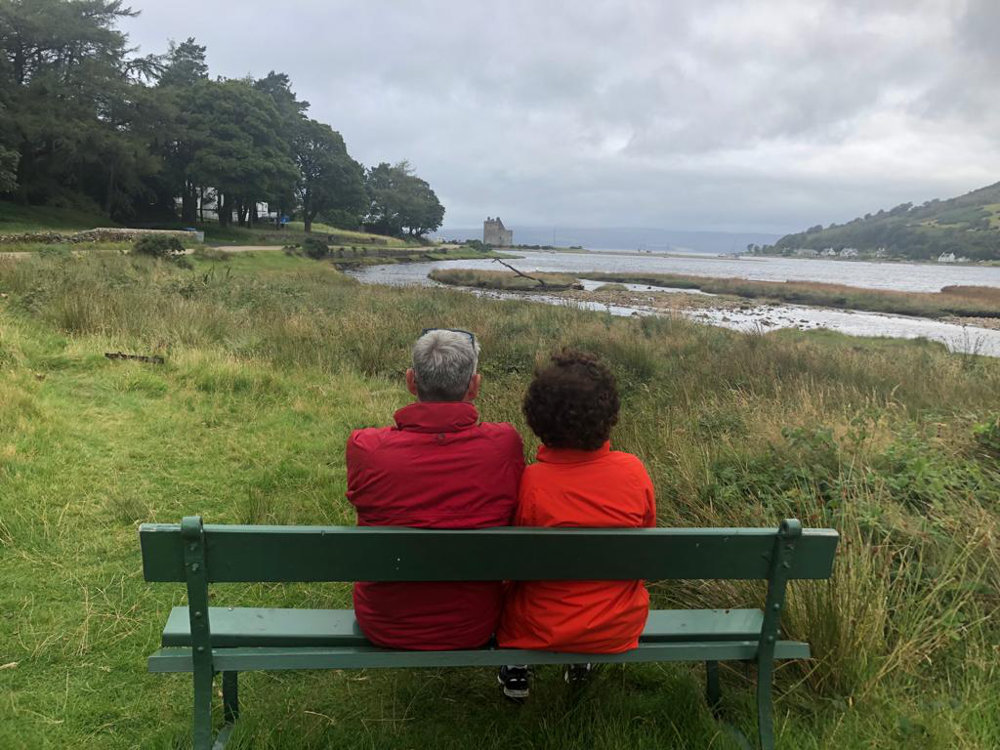 We drove all the way round the bottom of the island passing Blackwaterfoot, the home of The Arran Butcher and its famous Haggis and Black Pudding. Driving up the east side of the island we visited Kildonan Hotel for coffee and a great view over to Pladda with the sun splitting the sky.

We drove up through Whiting Bay which had begun life as a series of 5 separate settlements. The transformation of a group of tiny settlements into the Whiting Bay we see today began with the establishment of a ferry to Saltcoats in 1790. This was followed from the 1830s by the arrival of steamers from Glasgow and elsewhere in the Clyde Estuary. Clearance of Arran's inland crofting areas from the 1830s produced a demand for more accommodation on the coast, here and elsewhere on the island. But of all Arran's villages, Whiting Bay seems to have attracted the most upmarket clientele, and the result was a succession of fine villas being built along the landward side of the road running behind the bay. This is where the Vikings landed on Arran and it is thought that the current name Whiting Bay is a corrupted version of what was the original Viking Bay.

We carried on driving North until we arrived in Lamlash Arran's second biggest town. Again like Whiting Bay the basic character of the town is formed by a long building line of two and three-storey roughcast or stone houses lining the inland side of the shore road. The parish church and the former St George's church sit at either end of this series of buildings. Only the scattered buildings around the pierhead break this pattern. This elongated settlement character was already well established in the 19th century. The creation of Hamilton Terrace and its shorefront public space added to the image of Lamlash as it looks today. We were headed for the Glenisle Hotel where we had eaten before and hoped to sit in the beautifully manicured garden to enjoy an early evening meal before the sun went down. 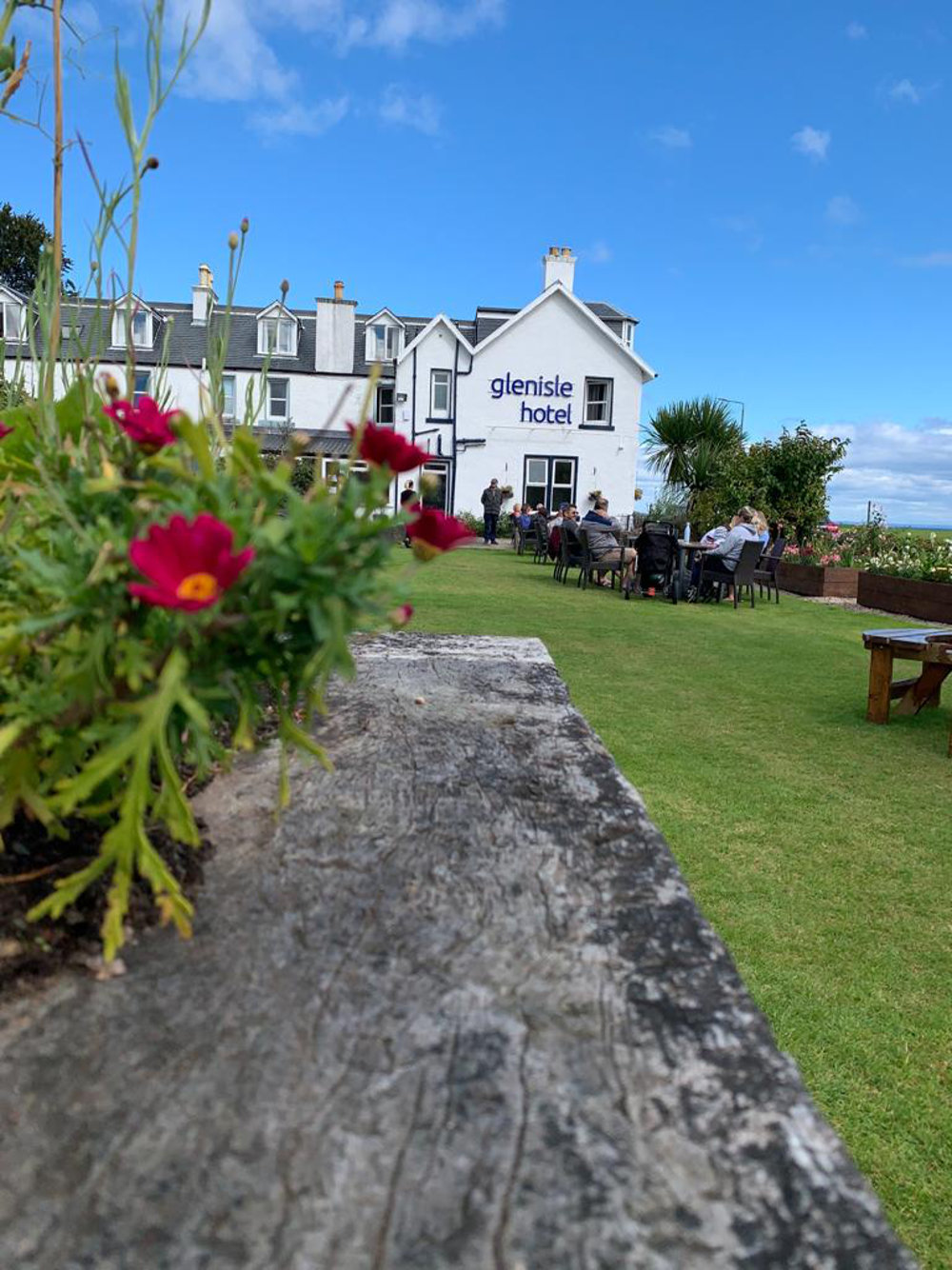 As last time we were not disappointed, the food was great all washed down with an Arran Sunset ale which was very appropriate and as you may have guessed will also appear in our hamper from this jewel in The Clyde.

Replete, we made our way back the 3 miles or so to Brodick to catch the last ferry of the day back to the mainland. 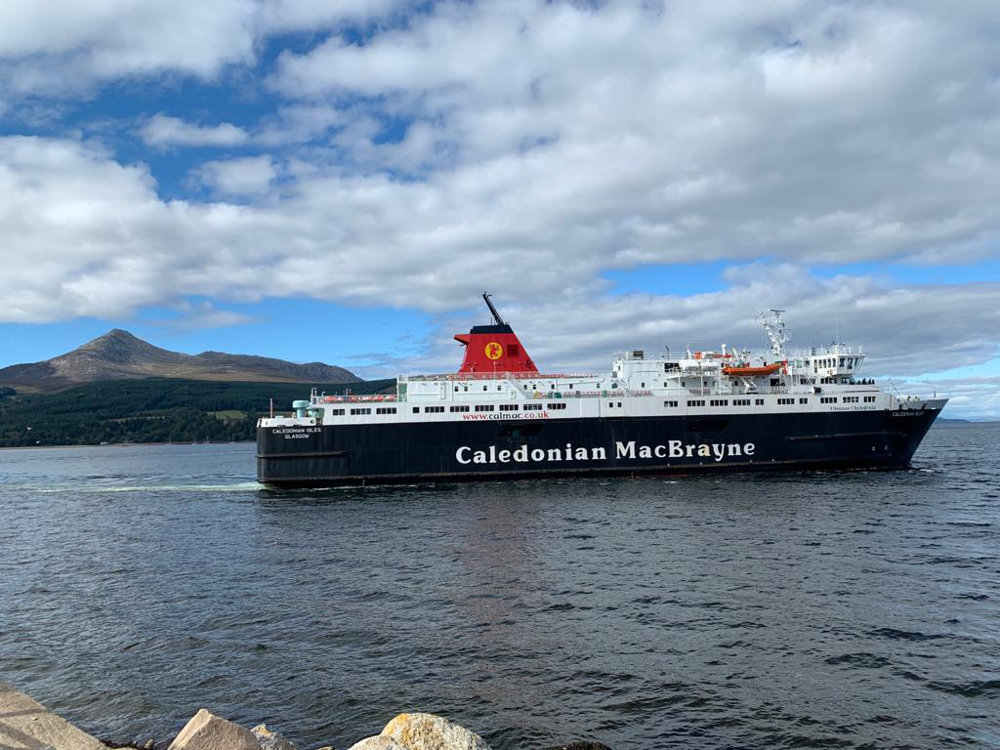 Researching only a few of the wonderful food and drink offerings on this trip which Arran has to offer, probably means I will have to go back again at some stage to complete my research. It's a tough call I know but I think I'm up for the challenge.

Look for our series of "Shopping Aisles" hampers which we will have available on the website very soon featuring not only Arran but Orkney, Shetland and The Hebrides as well. Our ongoing aim is to promote all that is best about what our wonderful country has to offer in the way of food and drink.

Enter your email address to join our mailing list and receive our latest offers direct to your inbox.